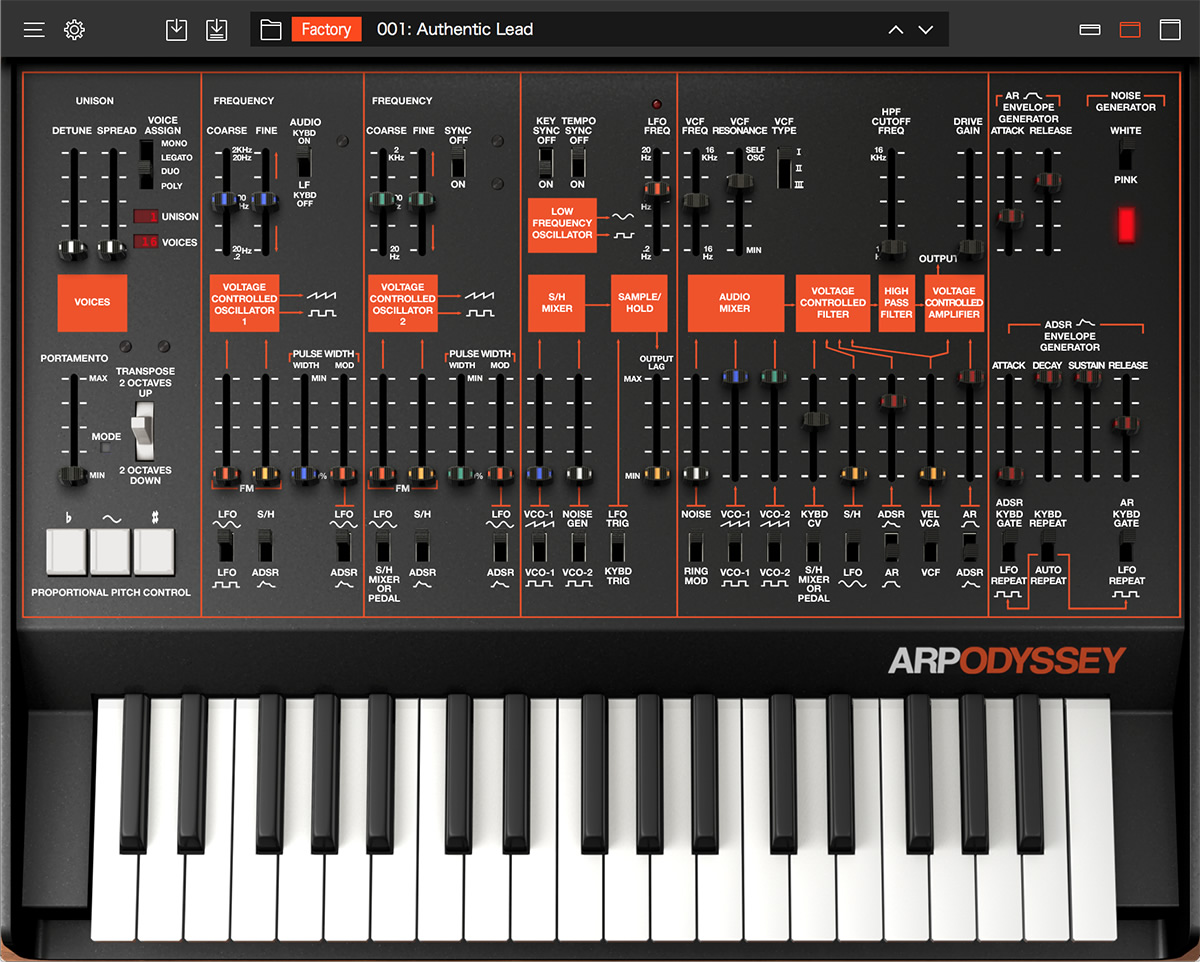 This is because, if the delay is 'wet', merely the wet ie. Only if the delay is completely 'dry' ie. It's better! The possibilities — such as dynamic mixing of multiple sources to create evil modulation curves — are considerable, and remarkable. If you wanted to get silly with an ARP , you could present external signals to its inputs and see what happened. However, there was just one place where ARP intended that you should insert such signals.

This was the Preamplifier, with its associated Envelope Follower. These are recreated on V, and using them proves to be simple. A Ring Modulator lies alongside the Envelope Follower. Testing showed that V modulator is 'AC coupled' the Audio setting which means that the carrier and modulator frequencies are not present in the output. Given a single option, I would select this one, but it would be nice to have the choice.

Up to this point, Arturia's programmers have stuck to the spirit of the ARP , but they couldn't resist adding something from the 21st century. It's the so-called 'Tracking Generator' that's tucked away behind the right-hand speaker grille. The manual describes this as having four audio inputs, four modulation inputs the on-screen jacks on the left of the module — although it's not clear what's being modulated and four audio outputs on the right.

As you can see from the screenshot below, this is incorrect, as there are no audio inputs, just the modulation inputs on the left of the module, which affect the frequencies of the control waveforms. The Tracking Generator. In essence, the Tracking Generator allows you to create four control waveforms using a variety of tools available in the Edit window provided for each.

You can then smooth these if desired, and direct the outputs to the destination s of your choice. You determine the frequencies of the outputs using the Freq knobs and, as elsewhere, these can be synchronised to MIDI Clock. While this may seem a bit advanced in an emulation of a s monosynth, the philosophy is not outrageous. On a smaller scale, this is what ARP did when they added an LFO to the ARP keyboard, thus freeing up one of the 's oscillators and extending the modulation capabilities of the complete system.

Which brings us to An example of a Tracking Generator curve. The first, the , was available only on the early models. Next, the monophonic, note P offered portamento and variable tuning, but this was later replaced by the duophonic , a far superior unit that incorporated the dedicated LFO that I've just mentioned. The was quite a sophisticated piece of equipment. For aesthetic reasons, Arturia have sited many of these functions elsewhere on V. Most noticeably, the LFO has migrated to the centre cabinet, where it has grown an extra output a sawtooth wave and MIDI-synchronisation capabilities.

However, the output from the LFO is very strange. Notwithstanding the fact that it goes up to Hz despite the manual saying that it has a maximum frequency of 20Hz , its waveforms exhibit 'stepped' shapes and complex spectra.


Counting the levels shows that the LFO is quantised with just three-bit resolution, but when you apply it to a destination, it does behave as it should, with smooth sines and correctly rendered triangles, squares and saws. Other keyboard controls now found in the sequencer section include the Global Tune knob, plus the Trigger Mode and Auto Repeat switches. The space thus liberated to the left of the keyboard is re-used to house a number of performance CV outputs — velocity, aftertouch and so on, plus a pair of pitch CV outputs; one at percent tracking, and the other at percent.

The original ARP appeared in four major guises, although many revisions were not honoured with a change of external design or a new paint job. Despite their cachet as the earliest ARP s, these 'Blue Meanies' were hand-built, notoriously unreliable, and difficult to keep in tune. The next revision was the shortest lived, and only a handful of 'Grey Meanies' exist.

These incorporated two handles and were very stylish, but they were deemed less suitable for ARP's target markets — performing musicians and schools — than the design that was to follow. The most common ARP s to are grey with white legending, and have separate synth and keyboard units. These came in two distinctive flavours. Early models, like the Meanies, used ARP's 24dB-per-octave filter, but this infringed a Moog patent and was replaced in by another 24dB-per-octave design, the Unfortunately, the had a fault easily fixed, as it happens that limited its bandwidth to just 12kHz.

If you hear an ARP and wonder what all the fuss is about, you're playing one without the correction! The final revision saw the synth adopt the black-and-orange livery of latter-day ARPs. This offered numerous internal improvements, most significant of which was the demise of the epoxy-encased circuitry of earlier models, which made these s relatively simple to repair. In fact, it's a recreation of ARP's separate Sequencer. As such, Arturia's emulation offers 16 CVs, and dual eight-step modes, sequential and random playback, three gate busses, the ability to set and modulate the clock pulse width, unquantised and quantised sequencer outputs, a novel Boolean AND function, and inputs to the quantisers so that you can convert any two external CVs into semitone voltages.

There's more that's the same as it was on the hardware so, rather than list everything, I'm going to mention the two features that have changed.

Firstly, there is no multiple. This is no longer necessary because — as elsewhere on V — you can direct a single output to multiple destinations. Secondly, the voltage ranges have been modified. The benefits of the improved quantised range far outweigh any loss at the unquantised outputs.

The ARP sequencer was sold separately from the , but Arturia's V incorporates a version of it.

The Patching menu. Connecting could not be simpler. Drag from a source to a destination or hold down the Shift key and click on any socket to reveal the patching menu. A source can be directed to any number of destinations, but each input can only receive a single source at a time. This is like having 10 additional VCAs at your disposal, and is extremely useful. First things first. Having done this, you'll need to set up the toolbar correctly, selecting such things as the MIDI input source, the keyboard range, and the audio channels for input and output.

This is also where you save and recall patches, determine the number of voices for monophonic, unison or polyphonic use, and select which part of V you're going to view the synth itself, the sequencer and keyboard, or everything. The last of these is important, because the full representation is big; pixels from top to bottom, which makes it too large for many monitors.

However, don't think that the sonic characteristics of each are on offer; the choice is purely cosmetic. One final aspect of the toolbar deserves a mention before I move on: it's the Magnet tool, which causes the patch cables to move out of the way of the mouse pointer when you want to adjust a control that may otherwise be obscured. If only my modular synths had this facility! The Toolbar, incorporating the handy cable-moving Magnet tool on the far right.

Having set everything up, let's start by noting a couple of things that are not implemented on V. Whether this is a problem or not is moot, especially when you remember that V is polyphonic. More importantly, you can't use the Voltage Processors to create static voltages, or as manually-controlled voltage sources. Happily, the additions are more significant: oscillator sync, the multi-mode filter, the tracking generator and variable keyboard CV tracking are very welcome, even though they bear no relation to the performance of the original synth. Once I got used to the layout, everything fell to hand mouse?

I wish Arturia produced a miniature ARP controller! So, what about the sound? Is this truly a reincarnation of the ARP ? With careful tweaking and no filter resonance I could create sounds that were almost indistinguishable from one instrument to the other. I could also tweak V with no discernable zipper noise. However, as soon as I added filter resonance, the differences began to show.

Furthermore, when using the USB controller, the stepping of the filter cutoff frequency became audible. As my tests suggested, the V's 24dB-per-octave filter may or may not be a good one, but it does not emulate the of my ARP As my patches became more sophisticated, the timbral differences became more significant, and it became apparent that, for some sounds, V lacks the depth of a real ARP It's sometimes subtle, but there are other times when something has definitely been lost.

It's still a ring modulator, but — notwithstanding the loss of the DC-coupled option — this one just doesn't behave the same. I also discovered that it is important to keep an eye on the levels within V, because too much signal will cause clipping and extreme distortion. If pushed, the ARP will clip by a smidgen, but nothing like V, so you have to keep this under control. Similarly different, if that makes sense, are the factory sounds supplied with V.

These are supposed to be recreations of the sounds supplied on patch charts with the original , but with the original ARP patch book to hand, an audio comparison revealed similarities, but no more than that. Overall, the presets are useable sounds, but they are not the ones from the original patch book. I experimented further with the sequencer and some of the more esoteric modules.

The is far more flexible than its panel suggests, so Arturia should be commended for including this alongside the itself. I particularly like the way that the output jumps to the step you're adjusting whenever you move one of the pitch CV sliders. When patched properly, this makes setting up a doddle. Next, I got a bit daring, using V as a signal processor for all manner of other software synths, virtual Mellotrons and electric pianos.

The results could be stunning, and I had great fun sequencing parameter changes, especially when synchronised to MIDI. Furthermore, I was pleased to find that my 1GHz G4 was capable simultaneously of supporting V with moderate polyphony and other packages without glitches, pops, or dropouts. Finally, I created a range of polyphonic patches that included strings, brass, pads, electric pianos, percussion and effects.

Initially, I found that V excels at producing edgier and more percussive sounds such as electric pianos at which it is superb rather than strings and brass. Arturia's 'factory' patches seemed to bear this out; there's hardly a string patch among them. But wait To test this, I loaded Minimoog V and V simultaneously, and copied the parameters of one of my string ensembles from the former to the latter. Having done so, the sounds were almost indistinguishable. If nothing else, this shows that the user-interface is an important aspect of any synth, guiding the way in which you conceive and create sounds.

Arturia's V takes the form of the original ARP , but adds many facilities not previously available, so we should judge it in two ways. Firstly, does it emulate — and sound like — an ARP ? Secondly, ignoring the original, is it a desirable synthesizer in its own right? The answer to the first question is no, unless your patches are quite simple. Nevertheless, the software retains much of the character of the ARP , and I applaud that. The answer to the second question is more important.

The V is powerful, it's extremely flexible, and its sound makes it something that you might choose to use whether it looked like an ARP or not. Add the sequencer, polyphony, and all the other features and — despite a few niggles — it all adds up to a very attractive package. 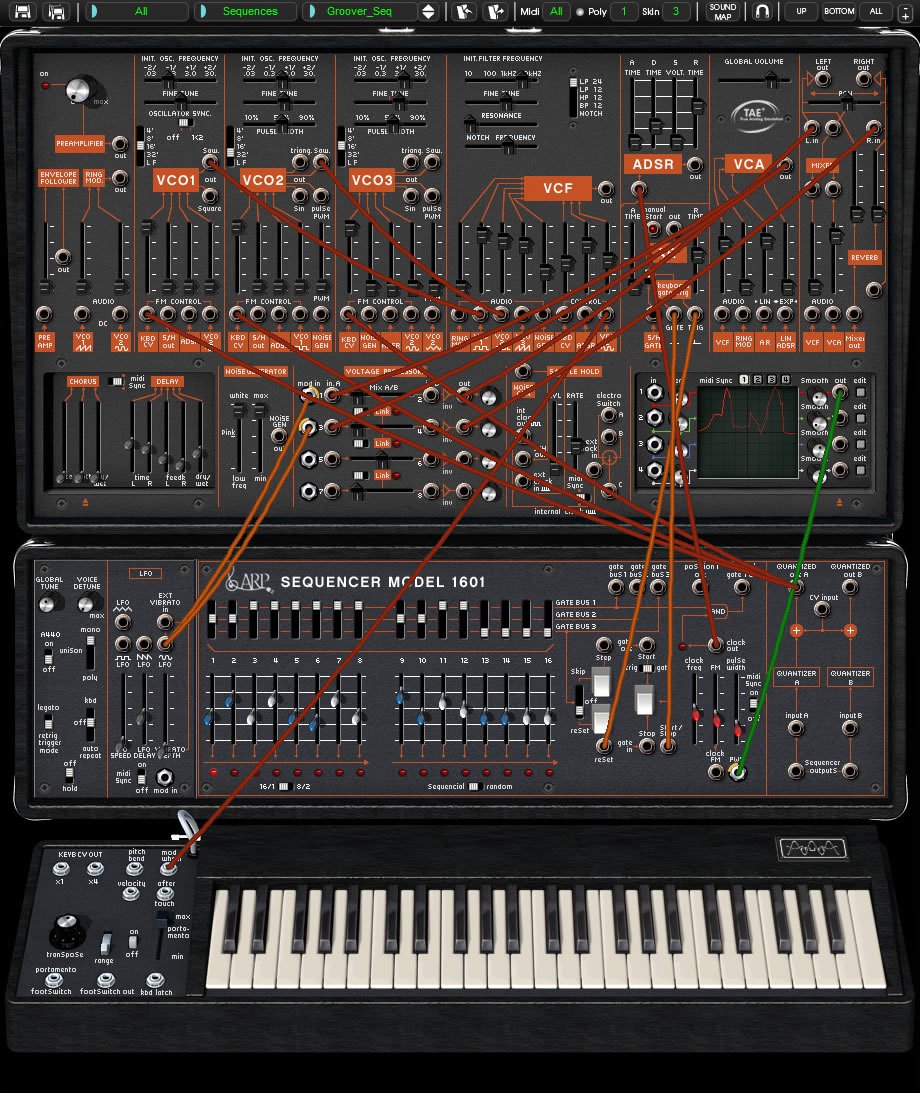 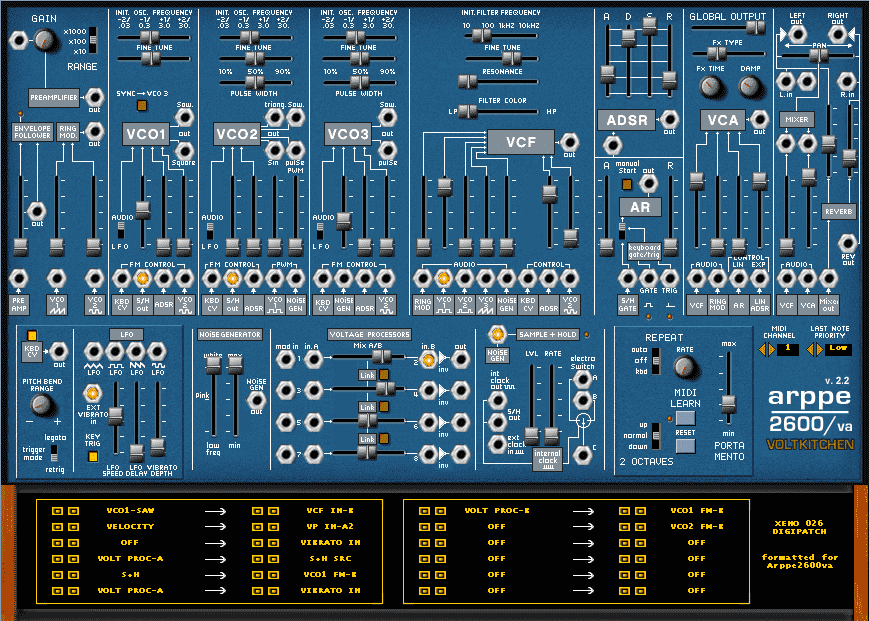 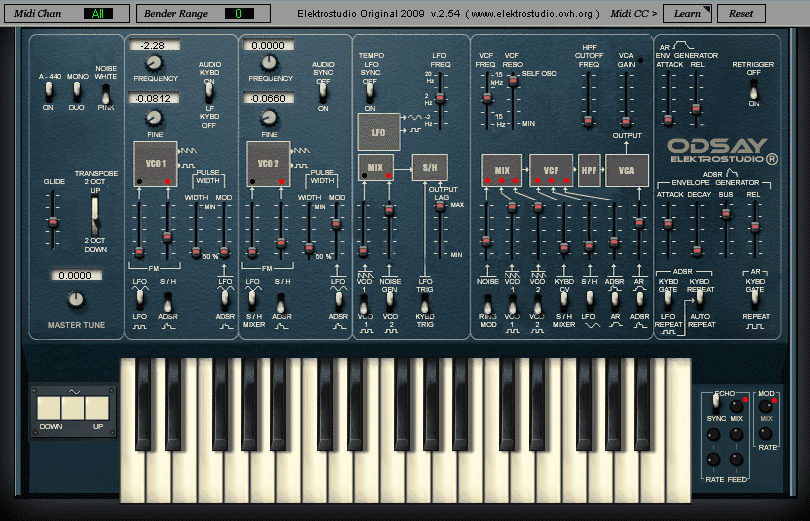